Eve McCrystal, talks Motherhood and The Road to Rio

Mother of two little girls Ava aged 7 and Nessa aged 6, Eve is a member of An Garda Siochana and is stationed in Ballybay Co. Monaghan. Originally from Dundalk, Eve has served 16 years with the Gardai but decided to take a career break last September to focus on her cycling. Time off would give her the time to focus on her training and also have the luxury, as much as having two children allows, time for recovery, which is the main difference between the amateur and the professional whatever the sport.

Eve was always sporty, swimming, athletics, football, you name it, her mother ferried herself and her brother, Bryan, to every single county in this country and to every race/match/swim meet that they were in. Bryan currently is the Irish Ironman record holder and as only a sibling can, Eve describes him “a pain really because he is one of those good at everything kinda people.” In 2000 she joined the Guards and moved away from sport for a while until she took up Triathlon in 2006. Eve completed her first Ironman in July 2007 (11:29) and her second in July 2010 (10:27). She also managed to fit in a half ironman and had her two children in that time. In 2012 with two Ironmans behind her, the 37 year old athlete decided she wanted something different. She joined the Garda Cycling Club and began racing. A colleague and friend of her’s Sandra Fitzgerald was piloting Katie-George at the time and had competed in the London 2012 Paralympics. Sandra left her pilot role in 2013 and Neill Delahaye, the National Performance Coach, contacted Eve and asked her would she be interested in trying out for the pilot position with Katie-George. Eve jumped at the chance and hasn’t looked back. 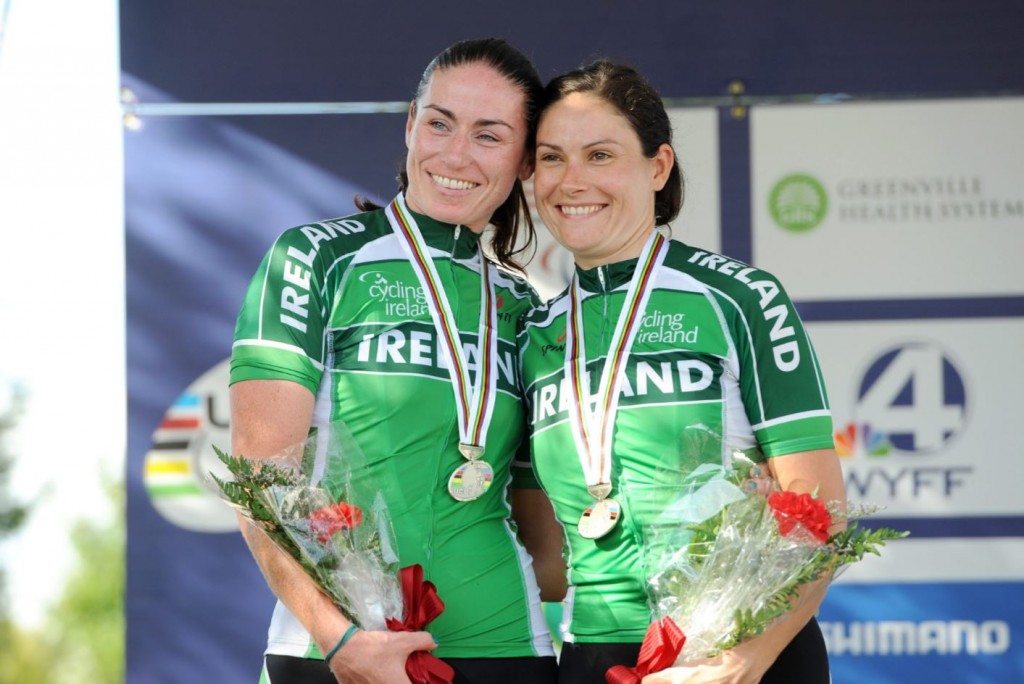 Eve and Katie-George competed in their first event in March 2014 in Mexico at the World Track Championships placing 5th and broke the National Record. Going from strength to strength but with a lot of bumps along the way, Eve and Katie-George have 2 world medals in their back pockets, Silver at the Road World Champs in Greenville 2014 and Bronze in Appledorn World Track Championships 2015.

Being a mother of two girls is Eve’s number one priority but she struggles with balancing her time between being there for her children and the requirments of her sport when she is away from home on camps and competition. Eve admits to having a fantastic support team, and she describes her mother as her back bone. Without her mother’s support, Eve would not be doing what she is doing today. Eve wants to be the best athlete that she can be and ensure her children are happy and content. As a mother and athlete she sometimes struggles with the sacrifices she is making, hoping they will pay off and hoping her kids will be proud of their mam. 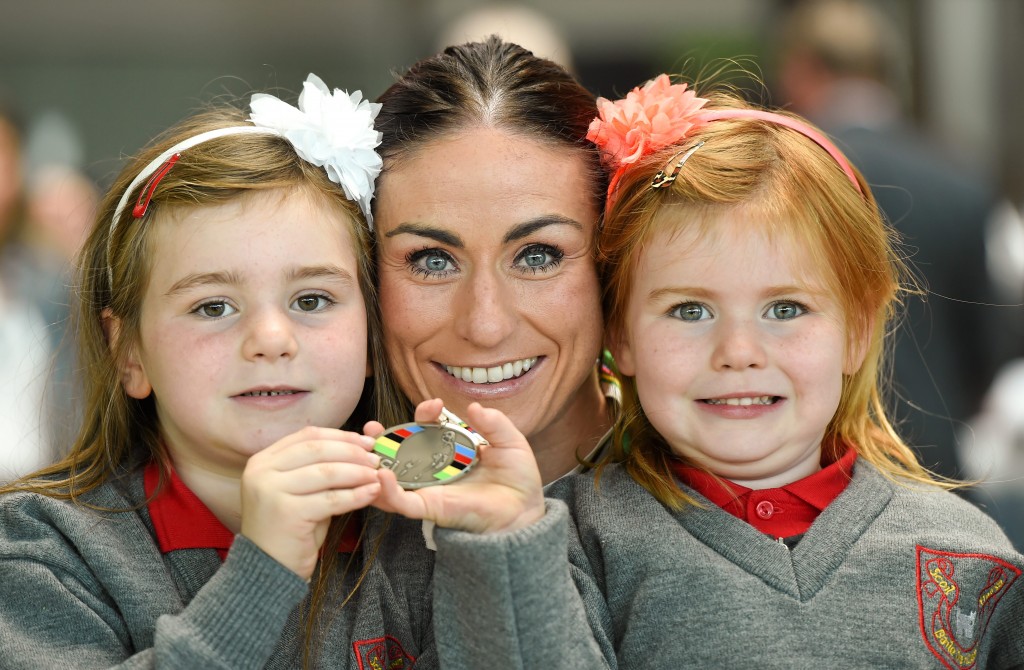 Eve is often asked does she like being a pilot and is it harder than riding on her own, the answer is that she really enjoys it, it allows her to express who she is as an athlete at an international level, a chance she may never have gotten if she cycled on her own. She has access to the best coaching and all the facilities that the Institute of Sport offers.

In Para sport, Tandem Pilots and Stokers are equally important. Both Pilot & Stoker are acknowledged equally as Elite Athletes with medals awarded to both. It is a unique relationship not just in cycling but in sport as a whole. The standard of tandem racing Internationally is very high and in order to get to the level required, especially in Paralympic year, a full time commitment from both riders is necessary. Both Eve and Katie must continually develop themselves individually as Elite athletes while also working very closely together as a team to ensure the bike gets faster as a unit. While the duo have had podium success at World Championships in the last 2 consecutive years, the current carding system does not acknowledge the equal workload and commitment with the visually impaired rider the only rider awarded a grant. Without pilot funding, this great duo will find it difficult to continue their great work and dedication required to reach the top. 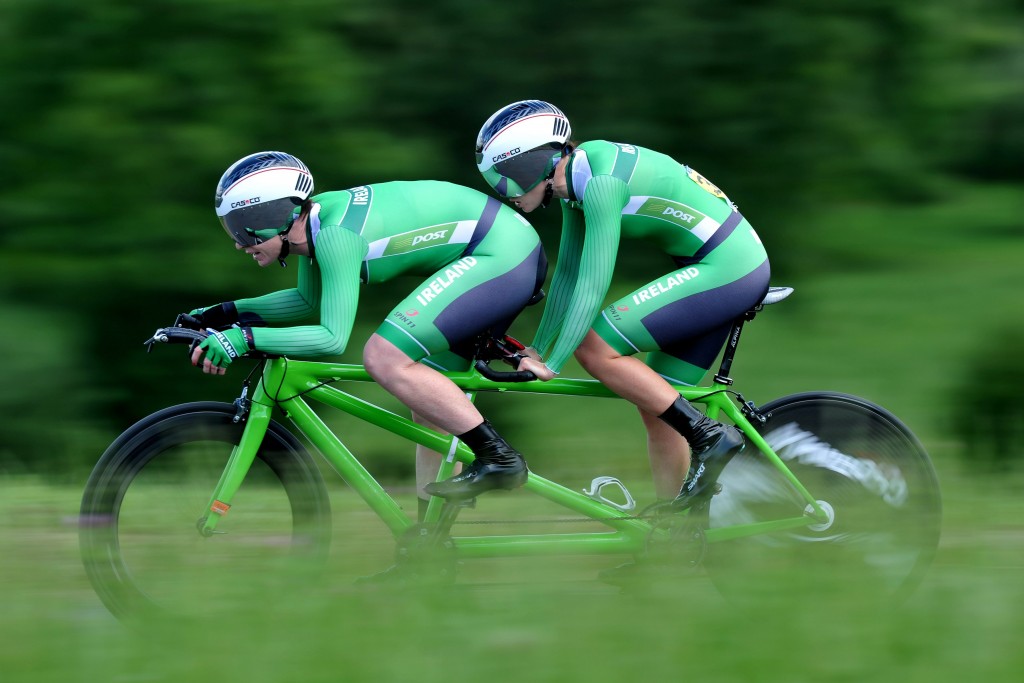 “Katie-George is an elite athlete, she is just limited with her sight so the only difference between us is I can see better than she can. It’s as simple as that because of this I steer, I control the gears, I brake, I make the initial move in a race etc. and Katie-George follows my lead immediately. Obviously we both have different strengths and weaknesses but together we are a great team and we balance each other out. I love to Time Trial, Katie-George loves to race. She is so vocal in races and reads races much better than me.”

Their relationship on the bike sounds like a match made in heaven, it also helps that they get on well off the bike too. They both want Gold at Rio, that’s their ultimate aim. It’s not an unrealistic goal, it’s achievable and both are willing to do everything to get that. Eve reckons the training is the easy bit, it’s everything else that they do off the bike that makes the difference like nutrition, strength and conditioning, mental strength etc.

Eve competed in the Ras Na mBan last September as part of the Garda Team. The team placed as the best Irish team and Eve wore the Green jersey as best Irish rider from stage one to finish which she was delighted with. However as bike racing goes it didn’t run smoothly. She would have liked to have placed higher in general classification (GC) but mechanicals and crashes meant she lost time as a result. As she mentioned earlier she loves to Time Trial and during the race she put in the best ride she had ever done however with her chain coming off this didn’t show in the final results, hard to swallow but that’s racing and as a rider you need to be able to move on and prepare for the next stage.

“I love this race, it’s a 5 day 6 stage race combining domestic and international teams. It allows us Irish girls mix with the best. Each year the level goes up and it’s great to see so hopefully more international teams will come over next year.”

While Rio will be the main focus for Eve this year, another goal for Eve is to compete in the National Time Trial Champs in June 2016. Eve took Silver in 2015 and it will be the only race she will target on her own this year. Down the road, Eve has Kona (the birthplace of Ironman) in her sights but for now it is all about herself and Katie-George, working as a team to bring those medals home.

Eve McCrystal, talks Motherhood and The Road to Rio